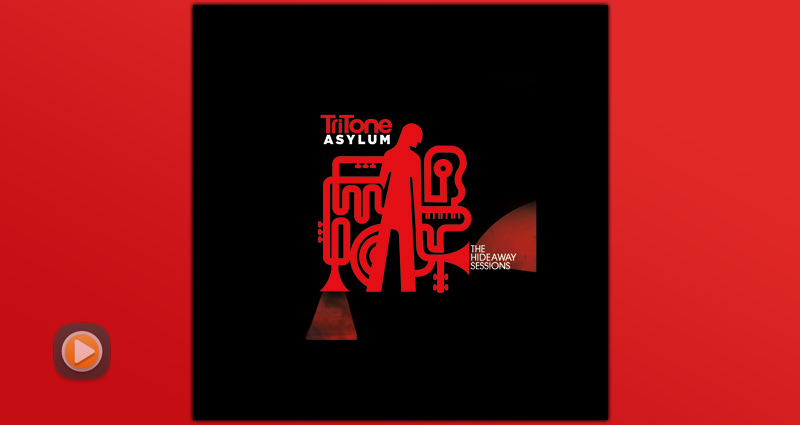 “The Hideaway Sessions” is the latest release from Los Angeles-based jazz collective TriTone Asylum who blend a diverse range of styles across 8 songs. Comprising of original jazz compositions penned by the group’s founders, EVI player Phil Topping and bassist Peter Sepsis. Topping, a Northern California native, was playing trumpet in the 1990s and actively involved in the West Coast swing revival movement of that era, performing with a group called Blue Plate Special that recorded several albums and toured nationally. He moved to Southern California in 1998 where he continued to perform locally, but because of an injury to a muscle in his lip, he was forced to put aside the trumpet. He became a music educator and today is the Jazz Director at Hamilton High School, a school that boasts many renowned alumni, including jazz luminaries John Daversa and Kamasi Washington. Although he was unable to play the trumpet for several years, Topping did not stop playing music. Instead, he switched to the EVI.

But one may ask, what the heck is the EVI? The Electronic Valve Instrument (EVI) is an electronic musical wind instrument utilizing playing techniques similar to that of a trumpet. It was designed to give performers control of dynamics from breath pressure and the ability to make a humanly generated vibrato. Other musical parameters can be controlled as well, and it has a playing range of seven octaves, much like a piano. The EVI controller is actually connected to a synthesizer, aiding in a much more natural sounding and expressive instrument when compared to the keyboard played without the EVI controller.

Topping was introduced to Sepsis in 2009, who had been playing music for as long as he can remember. As a youth, he played many instruments including piano, trombone, and guitar, but finally realized that he was most driven by rhythm and gravitated to the bass. Sepsis honed his musical chops in the San Francisco Bay area, playing Latin and Afro-Cuban rhythms, R&B, straight-ahead and progressive jazz in various groups. He moved to Los Angeles, met Topping, and soon formed a band with the addition of guitarist Andy Waddell.

Connected through their similar taste in music, including Herbie Hancock, the Brecker Brothers, Eddie Harris, and especially Pat Metheny, the two embarked on composing pieces for the band. Topping was particularly influenced by Metheny’s use of the guitar synth, which further caused him to become very interested in exploring the sonic possibilities of using the EVI as a lead instrument in a jazz setting.

There is a distinct free flowing street sound of celebration right from the opening composition “Grasshopper,” with its up-tempo Latin Calypso feel. The sound is airy and places me in a city park with the summer breeze blowing. “The 54 Blues,” puts a new spin on the blues, as it is in the 5/4 time signature and a melody that leans more into the realm of fusion jazz. There is a resonant roundness layered in by Mitch Forman’s organ on this down tempo piece.

Sepsis reflects on his visit to “Malawi” on the track of the same name wherein the melody echoes a birdsong from the shores of Lake Malawi. In a world beat feel the song opens with vocals by Sissoko, who originally is from Mali, and he also adds percussion on this track too.

Topping composed the very sweet tune “Ballad for Nongna” for his longtime companion, where one can hear the beauty of the EVI as the piece evolves. There are markings of Weather Report in both a smooth and fusion jazz blend that spreads nicely across the soundscape.

As the music and vision of the group evolved over the years, the band’s personnel went through several changes. Drummer Dave Johnstone became a member of TriTone Asylum early on. Sepsis says, “It’s vitally important for the bass player to lock in with the drummer, and I’ve always felt a strong connection to Dave. Right from the first downbeat, I know where he’s going. Having the same bass player and drummer has allowed us to have a consistent groove despite other changes to the band’s personnel.” Another important personnel change was the addition of saxophonist Ian Vo, after original sax player Allen Mascari moved away. Topping originally met Vo while they were both studying music at California Institute of the Arts.

Sometimes a band member can’t make a gig, so they contact their first call players, like pianist Henri Wilkinson, and reed player Gary Herbig, who, like Mascari, both appear on two tracks of The Hideaway Sessions. A more recent addition to the collective is the well-respected pianist Mitch Forman, who has become a permanent member of the group. Topping says, “The current group members are dedicated to making music together. This isn’t just a gig for us. We’re really like a family.”

Additional players who appear on the album are Baba Sissoko, a percussionist from Mali who also provides vocals on one track, plus percussionist Billy Hulting. The overarching concept for the album was to create music that is both accessible for the average listener and appealing to musicians. According to Topping, “I like music that tells a story. We don’t want to write music that is so complicated that you need to study harmony to understand it. The music has to have heart.” Sepsis agrees, “I try to make music that reflects the sounds of the street. That’s why we move between an Afro groove, then funk, then Latin. The sounds of the street are made by people in the diverse community that is Los Angeles. If I’m not moving people, I’m not doing my job.”

The band calls its music “electro-acoustic,” blending the sounds of the EVI and electric bass with the acoustic sounds of the piano, saxophone, flute, trumpet, drums, and percussion. For fusion and modern jazz fans TriTone Asylum has plenty of heart and is very accessible for the average listener. It is a pleasurable album that is a good friend for many joyous listens.