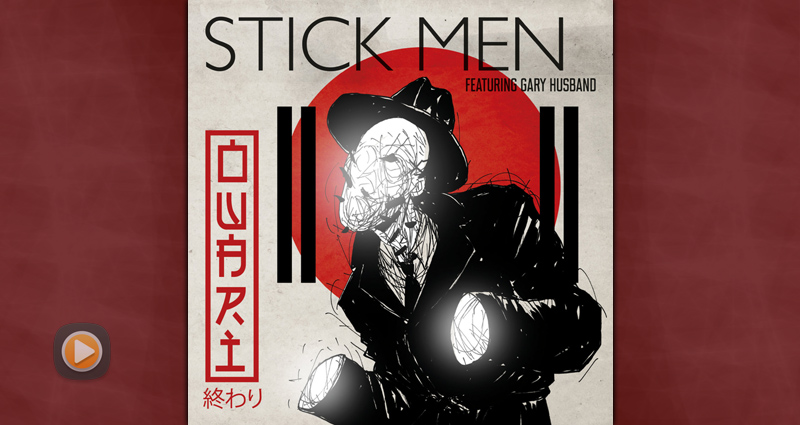 During 2019, Leonardo Pavkovic of MoonJune Music was working on plans for a whirlwind Asian tour for the band Stick Men in the early part of 2020. Comprising of the legendary King Crimson veteran rhythms section featuring Tony Levin on Chapman stick and Pat Mastelotto on drums plus acoustic and electronic percussion. Also, at the front the budding uber-genius touch guitarist, Markus Reuter. The lineup was super excited about the tur dates that included both China and Japan, as well as a stop in Hong Kong. Adding additional excitement and buzz to the tour was the inclusion of special guest, UK drummer, pianist, and keyboardist virtuoso Gary Husband.

However, with the realization of the worldwide pandemic, much of the far east tour was cancelled as governments shut down performance venues and imposed travel restrictions. Thus, this album, the aptly named “Owari,” which translates from Japanese to English as "The End," has become a timeless document of the abbreviated 2020 tour. Although Stick Men record each and every live show, they knew that this lone performance was destined for an album pressing. The music herein is truly a monumental performance, especially given the addition of special guest Gary Husband on keyboards. Although this album marks their first public performance together, and with only a few hours of rehearsal at the soundcheck and some verbal discussion about the music day before the show, Husband sounds more like a veteran group member, rather than a player who sat in with the band for the first time on the day of the show!

Sure, it is easy to say that this is the best recording from their tour, given that it is the only show. What is more remarkable is the connection among the four musicians that are in synchronistic flow, performing at their best.

Stick Men is a band in constant progression and evolution. As a trio, which has performed hundreds and hundreds of shows all around the world since their inception in 2009 (Markus has joined two original members, Tony and Pat, in the late 2010), as well with special guests, Mel Collins and David Cross of the King Crimson hall of fame, and specially now with collaboration with Gary Husband.

Owari is not 'the end’ per se, but is the new beginning of the band, closing the 11 years long chapter and starting a new more adventurous one.