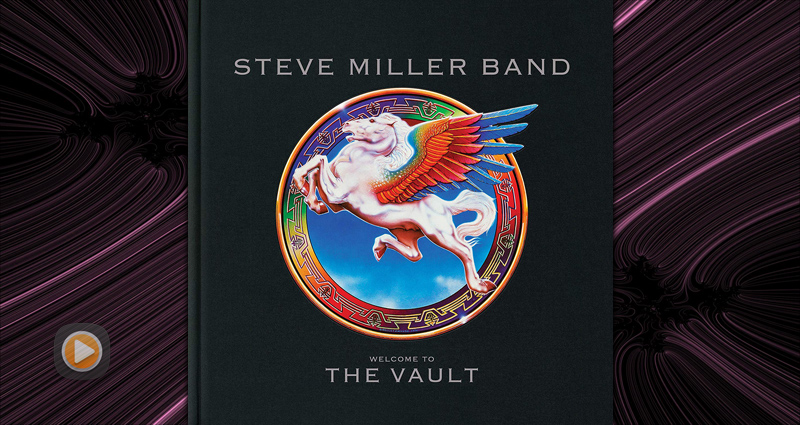 Steve Miller opens his massive vault for the first time to share his treasures, releasing “Welcome to the Vault” in 2019, a career spanning 3 CD + 1 DVD collection containing 52 audio tracks and 21 performances on DVD which includes 38 previously unreleased recordings, including 5 compositions that have never been heard before, and featuring alternate versions of classic songs, live performances and more. The DVD contains 21 live performances including rare footage from the 1967 Monterey Pop Festival, Don Kirshner’s Rock Concert in 1973, ABC In Concert 1974, a 1970 concert from the Fillmore West filmed for Dutch TV, Pine Knob Michigan in 1982, Steve and Les Paul at Fat Tuesdays (1990) and Austin City Limits in 2011.

Beyond the music, the box includes a 100 page hard bound book of Steve’s personal photos, with a 7,000 word essay by David Fricke. Also included in the deluxe set are 10 Guitar picks with Steve’s Pegasus logo, and an authentic backstage pass from the Steve Miller vault.

Box Set with 3 CD's + 1 DVD. Audio tracks from the 3 CD's available as a Digital Download or through Streamings Services.