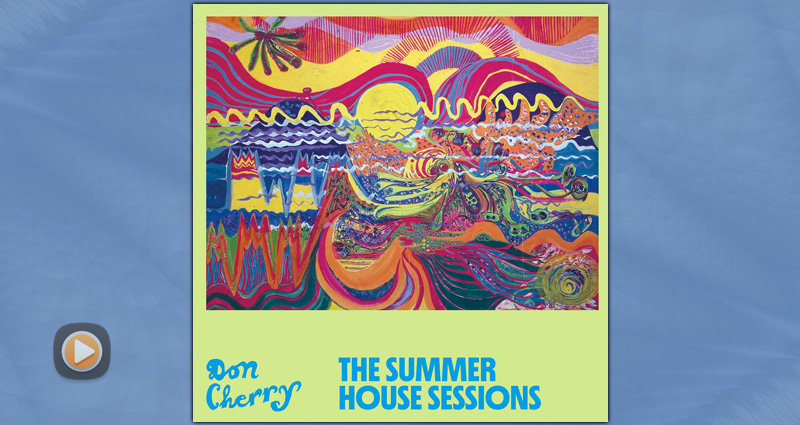 Having established himself as one of the leading voices of the avant-garde movement, Don Cherry dug into free jazz as a member of Ornette Coleman’s classic quartet, and with another high profile collaboration with John Coltrane under his belt he went on to assembled a group of Swedish musicians and led a series of weekly workshops at the Workers’ Educational Association, from February to April of 1968. Lessons included extended forms of improvisation including breathing, drones, Turkish rhythms, overtones, silence, natural voices, and Indian scales. That summer, saxophonist and recording engineer Göran Freese—who later recorded Don’s classic Organic Music Society and Eternal Now LPs, invited Don, members of his two working bands, and a Turkish drummer to his summer house in Kummelnäs, just outside of Stockholm, for a series of rehearsals and jam sessions that put the prior months’ workshops into practice. Long relegated to the status of a mysterious footnote in Don’s sessionography, tapes from this session, as well as one professionally mixed tape intended for release, were recently found in the vaults of the Swedish Jazz Archive, and the lost Summer House Sessions are finally available over fifty years after they were recorded.

The sessions on July 20, 1968, included Bernt Rosengren (tenor saxophone, flutes, clarinet), Tommy Koverhult (tenor saxophone, flutes), Leif Wennerström (drums), and Torbjörn Hultcrantz (bass) from Don’s Swedish group; Jacques Thollot (drums) and Kent Carter (bass) from his newly formed international band New York Total Music Company; Bülent Ateş (hand drum, drums), who was visiting from Turkey; and Don (pocket trumpet, flutes, percussion) himself. Lacking a common language, the players used music as their common means of communication. In this way, these frenetic and freewheeling sessions anticipate Don’s turn to more explicitly pan-ethnic expression, preceding his epochal Eternal Rhythm dates by four months. The octet, comprising musicians from America, France, Sweden, and Turkey, was a perfect vehicle for Don’s budding pursuit of “collage music,” a concept inspired in part by the shortwave radio on which Don listened to sounds from around the world. Using the collage metaphor, Don eliminated solos and the introduction of tunes, transforming a wealth of melodies, sounds, and rhythms into poetic suites of different moods and changing forms.

In the Swedish Jazz Archive quite a few other recordings from the same day were to be found. Some of the highlights are heard as bonus material on the CD edition of this album. The octet is augmented by producer and saxophone player Gunnar Lindqvist, who led the Swedish free jazz orchestra G.L. Unit on the album Orangutang, and drummer Sune Spångberg, who recorded with Albert Ayler in 1962. The bonus CD also includes a track without Cherry featuring Jacques Thollot joined by five Swedes including Lindqvist, Tommy Koverhult, Sune Spångberg, and others.