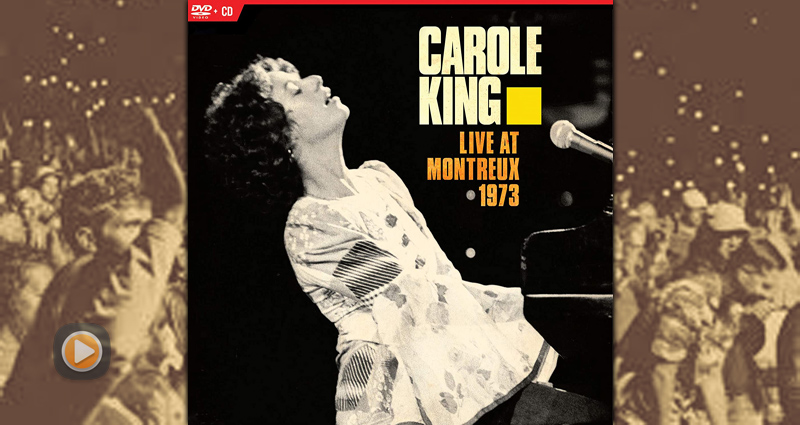 Finally, available on CD + DVD, this 1973 Montreux show, Carole Kings’ first ever performance outside of the U.S., captures the early stages of her truly remarkable career. Following the release of her fifth album “Fantasy,” singer/songwriter King performs with heartfelt energy, playing classic hits such as "It's Too Late", "I Feel The Earth Move", "You've Got A Friend" plus standout tracks "Believe in Humanity" and "Corazon" from her most recent album at that time titled Fantasy. As she plays through the stand-out tunes and many others, she is backed by an ensemble of remarkable musicians that aid in defining her style. DVD/CD Track Listing: 1. I Feel The Earth Move 2. Smackwater Jack 3. Home Again 4. Beautiful 5. Up on the Roof 6. It's Too Late 7. Fantasy Beginning 8. You've Been Around Too Long 9. Being at War With Each Other 10. That's How Things Go Down 11. Haywood 12. A Quiet Place to Live 13. You Light Up My Life 14. Corazon 15. Believe in Humanity 16. Fantasy End 17. You've Got a Friend 18. (You Make Me Feel Like A) Natural Woman.

Naturally, this historic concert is best viewed as a document rather than as a high quality concert film. Simply put, the technology was lacking back then. King’s performances are outstanding, and outweighs the mediocre footage and sound quality, making this a gem for fans of her work.

CD + DVD set.  Also audio only available as a Digital Download and on Streamings Services.